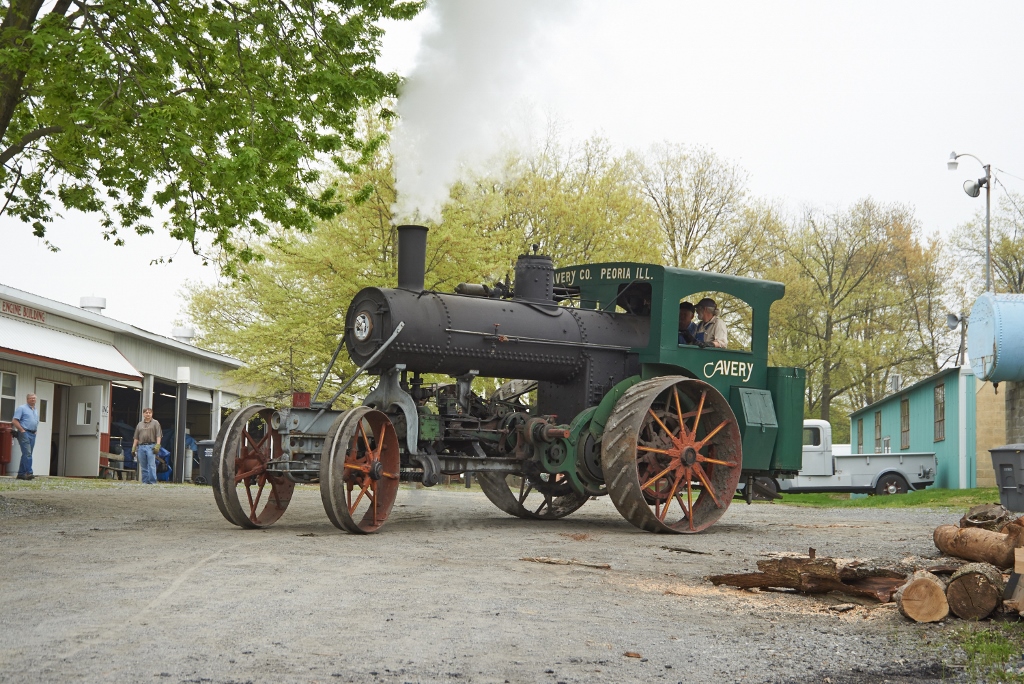 The air smelled of spring mixed with steam, coal smoke, sawdust, and fuel as nearly 2,000 people gathered at the Rough and Tumble Engineers Historical Association in Kinzers, Pa. They came from as far away as California and Oregon for the Fox Chapel Publishing 2014 Woodworking Show and Open House, held May 9 and 10.

This was the third such event for Fox Chapel Publishing, publisher of Woodcarving Illustrated and Scroll Saw Woodworking & Crafts magazines. However, past Open Houses were held at Fox Chapel’s headquarters, which is no longer practical. This presented a unique opportunity when the company’s president, Alan Giagnocavo, went looking for a new venue and found Rough and Tumble, a non-profit museum dedicated to preserving America’s agricultural and industrial history. “Rough and Tumble is a hidden gem right here in Lancaster County,” he said. “There’s so much going on, from steam trains to antique plows, a sawmill, and tractor pulls. I knew our readers would be fascinated by the museum, and I figured that Rough and Tumble members are probably woodworkers, even if they don’t know it yet.”

The show was scheduled in conjunction with Rough and Tumble’s annual spring event. The museum is staffed entirely by volunteers brought together by their love of relics from America’s rural past. At the Spring Steam-Up, members shake off the winter dust, fire up their antique tractors and engines, and invite the public to see, touch, and smell history.

Amidst this background, the woodworkers, including scrollers, carvers, and turners, were entirely at home. In one barn, exhibitors and vendors from around the country manned booths and display tables. Bushton Industries, Seyco, Arbortech, and MDI Woodcarvers Supply offered woodworking tools; Ben Fink’s Wood Shop sold scroll saw blades; and Hillcrest Carving sold woodworking supplies and wood. In addition to teaching seminars, Judy and Dave Peterson and Shawn Ferguson displayed their puzzles, Janette Square showed off her intarsia, Carole Rothman exhibited her bowls, and John A. Nelson demonstrated his new method of adding color to scrolled projects. Although Rolf Beuttenmuller, a frequent test cutter for SSW, wasn’t displaying his work, he taught seminars on basic woodworking and advanced scroll saw techniques. Additional offerings in carving, turning, and general woodworking rounded out the schedule of 40 classes.

In the other barn, hands-on demonstrations were held right next to antique tractors. Volunteers from the Penn-Jersey Scroll Saw Association and the Tri-County Scrollers demonstrated scroll sawing and helped visitors cut a simple puzzle, while other clubs and volunteers helped show-goers carve a five-minute owl, turn a pen, make a craft, try woodburning, or see an authentic totem pole being carved.

Outside, chainsaw artists Zoe Boni and Joe Dussia wowed visitors with their loud, fast, and furious work, while Chris Lubkemann charmed guests by carving whimseys from twigs and branches. Show attendees wandered all over the outdoor museum to observe the steam-driven sawmill, scale models, classic cars, and other displays; so, too, did curious Rough and Tumble members visit the woodworking displays and try a hand at scrolling, carving, and turning.

Late Saturday afternoon, when most of the guests had gone home, the tired but elated staff of Fox Chapel Publishing piled into the train cars for a victory lap around the museum. Afterward, Alan Giagnocavo paused to sum up the weekend. “It was great. It was dusty, and the tractors and trains were a little louder than we expected, but we had a great time. We brought together a lot of people who love the same things we do, and they got to take classes, and get their hands on new tools, flip through some books, and really dig in to the things they like to do. Plus, this place, the Rough and Tumble, is just fascinating. We can’t wait to do it again next year.”